Kiwis unable to holiday overseas due to Covid-19 are buying mobile baches instead.

Engineering a way through the Covid contact tracing conundrum

While most Kiwis were hunkering down in alert level 4 alert in April, Dean Armstrong was in his garage soldering a possible way out of the lockdown conundrum.

8:56 AM  It's nearly impossible to find a breadmaker, Briscoes boss says as a cashflow crunch looms.

STA, Air NZ customers have another option to get refunds - chargebacks

NZ firm Refund Club can help unhappy creditholders get a refund from suppliers, if they paid using a credit or debit card.

How I'm adapting to life after a blow to the head

ANALYSIS: Rob Stock was concussed during a Nerf gun battle. He talks to the experts about adapting to working life after a brain injury.

Fashion stock back in vogue

Clothing company gives investors something to cheer about.

$140 a kilogram: Whitebait back to 'gold-plated' prices

The tiny fish leaves salmon and snapper in its wake.

The airline has started to draw on a $900m loan from the Government.

OPINION: It's cheap to borrow and hard to think of an asset that wouldn't deliver a return.

Premier Investments is prepared to close a number of its chain stores if landlords are unwilling to renegotiate rents in a post-Covid-19 retail environment.

Tourism and other industries need to put away the cap and come up with 'realistic plans' says former finance minister.

The $8 million in government support in NZ and Australia was key to keeping on staff, fashion retailer says.

But Kiwis who are still in work appear to be less afraid of losing their jobs in the coming year.

Sir Stephen Tindall has been with the company since he founded it in 1982.

Air NZ's All Blacks sponsorship up in the air

Air NZ and the All Blacks are "in discussions" as the end of a sponsorship deal between the long-time partners nears.

For Ann and Steve Thornton, the coronavirus lockdown turned their dreams of a comfortable retirement upside down.

Here's how to boost your financial muscle

Not seeing benefits from taking your business online? This might be why

OPINION: Covid-19 forced plenty of businesses into the online world – but reaping the benefits requires time and energy.

Kiri Nathan is carving a path for Māori fashion

“There’s pressure to keep it running as well as the previous owners. But we’re up to it."

Reap the benefits of supporting your staff's mental health and wellbeing

OPINION: Supporting workplace wellbeing is within your control and important to consider.

Not seeing benefits from taking your business online? This might be why

OPINION: Covid-19 forced plenty of businesses into the online world – but reaping the benefits requires time and energy.

The cash will go towards paying specialist staff salaries and building maintenance at the park, which houses more than 1000 animals.

Kiri Nathan is carving a path for Māori fashion

Reap the benefits of supporting your staff's mental health and wellbeing

OPINION: Supporting workplace wellbeing is within your control and important to consider.

You could buy a house for $155k in Cobden, NZ's cheapest suburb, but should you?

Being mortgage-free and having a big pile of cash is tempting, but there are some fishhooks to buying in a place where houses are a super cheap.

Developer's plans to remove three homes on a corner site in Richmond and build seven two-storey homes ticks all the boxes and has been called a "win-win".

It's one of the best times in 20 years for investors to borrow money, and Southland gives a big bang for your buck right now.

OPINION: Auckland may shoot ahead again but not by as much as some periods.

The National Party's problem is a lack of ideology

OPINION: Growers will be able to produce crops more efficiently and responsibly.

We know daylight saving means more light in the evenings, but where did it come from? And why do we check our smoke alarms?

One farm is currently under investigation for M. bovis in Southland, while another three were declared infection-free last month.

OPINION: Growers will be able to produce crops more efficiently and responsibly.

'I've never seen anything like it': Shrek 2 found in Gisborne

Her fleece is 60 centimetres long and she has been evading capture for years.

Why climate-heating methane escapes our landfills

New Zealand landfills are “world class”, according to a waste expert — so why do they still warm the climate?

Flight to nowhere a pointless waste of emissions

Earn over $59k? Your peers emit half the world's carbon

Worldwide, people earning over NZ$59,000 contributed 52 per cent of all greenhouse gas produced over 25 years.

Working at 3am. The price some travellers are happy to pay to stay on the road

Remote-work programmes as far away as Estonia and Georgia have been attracting people who have been itching to travel again.

California just started the clock on a future that a few years ago would've been unthinkable: dealerships full of nothing but zero-emissions cars.

Sleeker, more affordable cars that can travel dramatically further on a single charge is what Tesla is promising from its latest battery tech.

Airlines plead for mandatory virus tests to prop up demand

Industry argues that a 100 per cent adoption of rapid antigen tests would remove any need for quarantines.

You could buy a house for $155k in Cobden, NZ's cheapest suburb, but should you?

Engineering a way through the Covid contact tracing conundrum

The National Party's problem is a lack of ideology

Wineries that can't charge for tastings call for law change

How I'm adapting to life after a blow to the head

87% of websites are tracking you. A tool can run a creepiness check

How well did Southland do with the Provincial Growth Fund?

DABS Consulting is currently looking for investors for a commercial property - a new, multi-tenanted complex in Henderson, West Auckland. 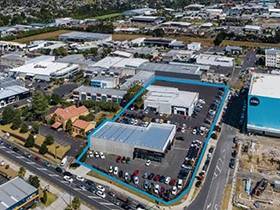