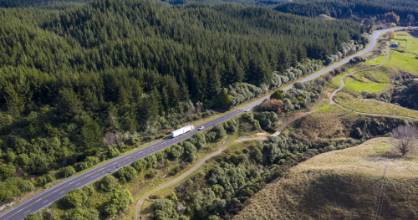 9 min ago  Hawke's Bay leaders say Waka Kotahi failed to follow its own rules and guidelines before reducing the speed limit on Napier-Taupo highway.

1:54 PM  Police are concerned that several people heard the gunshots and failed to report them.

12:45 PM  A new survey shows the capital's sense of community has taken a hit, with Wellingtonians saying they're losing their pride in their city.

Ministry of Education staff at Tawa College after alleged stabbing

A 15-year-old boy has been charged with wounding and another person is in serious condition following the incident on Tuesday afternoon.

They marched over the bridge to go to war, now it's being saved

Reimagining Wellington: What could we achieve with ambition and bold leadership?

We wanted to spark a discussion about how to make our region more liveable, more affordable, more connected.

Bringing Wellington's streams back to life and light

Wellington has buried hundreds of kilometres of natural streams in underground pipes. But what if we brought them back to the surface?

Reimagining Wellington: How Seoul uncovered a stream and changed the central city

What we can learn about one Asian capital's ambition to rehabilitate natural waterways, just like those under Wellington's streets.

Reimagining Wellington: How a London construction scheme is breaking barriers

The UK's first female scaffolder says the job is like "watching something come to life," and she wants other women to experience that too.

Reimagining Wellington: Cities are about sharing space (including with the trees)

Hannah Hopewell of Te Herenga Waka Victoria University on landscape-led urbanism, where the nature and people can co-exist.

Golf is capitalism in polo shirts and slacks

OPINION: Golf's link with power and money and the status quo is forged in steel.

The great price panic - and why Labour should be worried

Why does the internet hate Amber Heard so much?

They marched over the bridge to go to war, now it's being saved

The project to preserve a bridge crossed by thousands of New Zealand troops as they marched off to the battlefields of World War I is underway.

How I write: YA author Chloe Gong

The #1 New York Times bestselling YA author is hosting an event at Unity Books in Wellington on May 19.

World of WearableArt show back after two-year Covid-19 hiatus

The audiovisual fashion spectacle returns to Wellington in September after being cancelled twice over the past two years.

This Ōtaki-based artist is on a mission to stamp out racism in Aotearoa.

Defending champs believe the addition of Aussie league standout Xavier Cooks puts them right back in contention in 2022.

Netball New Zealand's 'Aspiring Silver Fern' of 2021 and Pulse midcourter won't be spotted again this year after tearing her ACL.

Stars gain important away win over Pulse in the capital to move closer to securing ANZ Premiership finals spot.

The Phoenix are looking forward to getting home after their crazy campaign, spent primarily in Australia, ended with a defeat in the playoffs.

Hurricanes fight back for crucial win over Waratahs in Sydney

Quest for home quarterfinal still on as Jason Holland hooks both starting props and Canes come from 15-0 down with a late Ardie Savea try.

The Wyndham-branded hotel is is being developed on Vivian St by the Stonewood Group, owned by the Chow brothers.

The daughter of John Britten and her husband spent $2.5m renovating the property - which has seven en-suite bedrooms, a glass atrium and an indoor pool.

A fully leased student apartment building offering a significant and secure income in the heart of Wellington city is on the market for sale.

A landmark central Nelson property, Wainui House, is up for sale, with the potential for residential development.

Residents living near a noisy factory are still being kept awake despite the factory meeting noise standards.

Gabe Davidson makes sweet treats for a living, but he also likes an occasional savoury brunch.

Budget 2022: The cost of living crunch

When Stuff spoke to people about what they wanted from the Budget, there was a common answer - we want more than just "getting by".

ANALYSIS: Much of the Australian campaign has echoed political debate in New Zealand. But one subject has loomed large in a way it never has here – China.

How I write: YA author Chloe Gong

The #1 New York Times bestselling YA author is hosting an event at Unity Books in Wellington on May 19.

Everyone's screaming 'buy now!', but it's not that easy

OPINION: Housing supply might be up, and house prices down, but that doesn’t mean it’s easy to buy a house in Wellington.

World of WearableArt show back after two-year Covid-19 hiatus

The audiovisual fashion spectacle returns to Wellington in September after being cancelled twice over the past two years.

One student thought “this must be very serious” when first responders raced up the school drive, while a mother felt panic upon hearing the news.

Some luckier families are in NZ and thriving, while others are trapped in their homeland – without certainty and fearing for their lives.

View marriage and birth notices from around the region.

View obituaries from around the region.

How to subscribe or report a problem with your paper

Details for how to contact the Dominion Post's customer service team

Get in touch with the DomPost newsroom