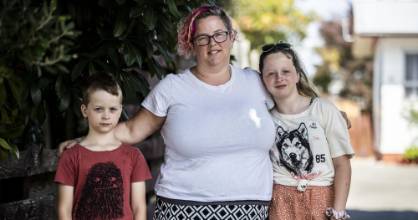 A Palmerston North woman has lost count of how many open homes she attended before she had an offer to buy a house accepted.

An intriguing discovery in a Palmerston North gravel pit may only be as big as the palm of a hand, but its provenance is intriguing.

Last year he took a step back from the game. Now, he's earned his second Charles Tour win.

Woman offended against wants people to be wary of man; says what he did didn't break her.

The Red Waka proved too hot to handle on an explosive night of racing.

A family haunted by meth

Leighton's wife didn't recognise him, and his daughters were ashamed. But he survived.

By the numbers: Meth use increases despite fewer border busts

There's less meth coming into the country, but large numbers of Kiwis are still struggling with the drug.

The slide was closed in February 2019 due to safety concerns. After wind-related delays it's up and running again.

He finished tied with overnight leader Mako Thompson, but claims the top spot for Snday because he had the better third round.

The 1998 Commonwealth Games were a lonely time for Gary Hermansson, one of 20 men in the Palmerston North Boys' High School Sports Hall of Fame.

One dead after single-car crash in Whanganui

SH4 between Whanganui and Raetihi was closed on Fridaty night; emergency services also rushed to a crash in the city.

An international student fears her studies are in jeopardy following the death of her father and problems securing a visa.

'Horror play' or unforgettable human drama — the Municipal Opera House played host to a man who lost both hands, but had new ones sewn on.

Across the river from the mothballed road, heavy machinery is changing the face of the landscape as construction rumbles into action.

The long jump, javelin 300m hurdles and 3000m titles were decided at the final night of the Manawatū-Whanganui track and field championships.

Amid the sound of Irish folk music and the smell of freshly made food, two women sat for lunch after a morning's work.

A family haunted by meth

'Horror play' or unforgettable human drama — the Municipal Opera House played host to a man who lost both hands, but had new ones sewn on.

Asexual is the primary form of reproduction for single-celled organisms such as archaea and bacteria and, more recently, road cones.

OPINION: The turnout in summer by-elections was an embarrassment and something must be done to reverse this trend.

Let's hope there is drive within the Manawatū Golf Club to keep the NZ Super 6's tournament, or its equivalent, trucking for future years.

Students' declining ability in maths and science a concern

OPINION: New Zealand youngsters are falling further behind, which doesn't bode well for the future.

These cookies utilise pantry staples and they are super adaptable.

This is a deliciously moist bread that isn’t too sweet and keeps well for several days.

No need for pay-to-play with new Pahiātua sports club

This salad is best served chilled straight from the fridge so to keep the crunch factor.

During cooking, the sweet and salty juices of this dish combine with the onion to create a rich sauce.