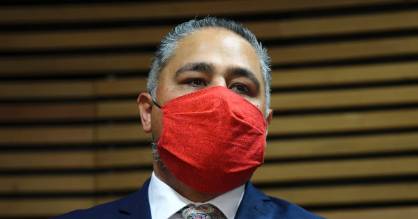 Nelson College hosts a pop-up Covid-19 vaccination clinic, with the DHB arranging more "community clinics" at schools and venues across the region.

"Seismic concerns" being investigated in the teaching block, on NMIT's Nelson campus.

The man had to be airlifted to Hutt Hospital after suffering 'nasty lacerations'.

Safety in own home taken by ongoing abuse, court hears

A man has been sentenced to 12 months imprisonment after he punched his ex-partner and threw a heater into a wall.

Woman bit police officer on a night out

The impact of Covid-19 could be felt for another three years as the Nelson Marlborough District Health Board works to clear backlogs.

Tasman District Council will on Wednesday consider calling on the Government to extend the timeline for its Three Waters reform programme.

After more than 20 years of weathering the elements, the face of Whakatū Marae has been refurbished and renewed - but the story of the marae is unchanged.

Stopping the land from slipping off a Nelson hill could top $100,000, with thousands of tons of soil already removed in a bid to stabilise the fragile site.

Group express safety concerns over development, saying an accident is inevitable and councillors will be held "responsible for any harm" caused.

John Mitchell, well-known and respected Māori historian, has passed away.

Good harvest volumes and log prices for Tasman District Council in 2020-21 helped drive up the overall activity surplus in the foresty closed account to a whopping $12.5m.

Gourmet adventures along the Heaphy Track

Paella by candlelight and banquets of lamb tagine and salmon fillet on the country's oldest Great Walk.

The 36-year-old believes the 268km course in Flanders is tailor-made for an aggressive rider like himself.

A woman who thought she'd been punched in the back soon realise she'd been stabbed.

Tasman District Council is planning direct procurement for some projects as it eyes up an ambitious 2021-22 capital works programme worth $98.1 million.

What's On in Nelson

What's keeping you entertained in Nelson.

The fabulous Far North never fails to fire up your spirits

Northland is rich in history, and it wouldn't be too much of a stretch to say every Kiwi should make a pilgrimage there.

Nelson artist Ann Braunsteiner has transformed the windows of an empty inner city building into a sprawling work of graffiti art.

Out Here in Whakatū

Once-marginalised voices, characters and themes are finally finding their way into print.

Local women have been belting out tunes since 1993 and have never sounded so good. But they're now singing out for a new director to take them to the next level.

Tasty proposition to tempt you

Local businesses need local support, and ordering online from your local is one way we can all play a part.

WFH? Get me back to the office

OPINION: I've got the perfect working from home space, so why do I feel so unproductive compared to being in the office?

OPINION: It's time to rethink our affair with the "monsters" on the road.

Top of the south businesses are joining in the urgent mission to manage their emissions.

Merging colleges would be 'a mistake'

OPINION: The zoning controversy is not an opportunity to make single-sex education a culture war target.

John Mitchell, well-known and respected Māori historian, has passed away.

The fabulous Far North never fails to fire up your spirits

Northland is rich in history, and it wouldn't be too much of a stretch to say every Kiwi should make a pilgrimage there.

Local women have been belting out tunes since 1993 and have never sounded so good. But they're now singing out for a new director to take them to the next level.

A career behind the lens

Martin De Ruyter has seen more than most, documenting life over a 35-year career at the Nelson Mail. Here are his 10 favourite photos.

Locked down 1000km from home

A Nelson woman locked down nearly 1000km away in Invercargill is making the most of it.

Out Here in Whakatū

Once-marginalised voices, characters and themes are finally finding their way into print.

Taste Tasman is the latest festival to announce its arrival in the region, so bring your mates and a massive appetite for fun.

New look festival returns to the heart of the city

The Nelson Arts Festival returns this October with new directors, an exciting line up and a new base in the central city.

"The streets came alive" for Nelson's biennial light festival, brightening the city centre as well as the usual Queens Gardens.

UV Spaghetti food for the soul on cold winter nights

Te Ramaroa has spilled out onto Nelson streets. Organisers are “absolutely thrilled” with the result, and kids are eating up the UV Spaghetti installation.

View births, marriages and celebrations from around the region