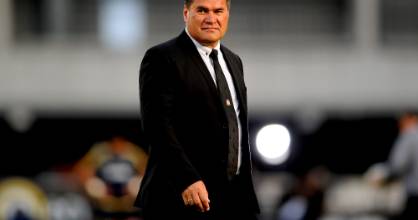 Kiwi coach flies into Sydney with hectic schedule to kick-start his coaching reign.

Chiefs coach Warren Gatland wastes no time in planting a psychological seed ahead of the big opening round clash.

English champs to be relegated

They may have lost a stack of experience, but Crusaders will still take some beating in 2020.

Crusaders too strong for Canes

Cricket edge out Rugby in thriller

No suspensions for repeat offenders in Super Rugby, while Sanzaar slash three referees from 2020 team.

As her husband battles for his health, Tatiana Fatialofa opens up on a not so glamourous side to sport.

Owen Farrell urges Saracens to "stand up and rise'' before second half comeback in Paris.

Most clubs 'don't have £500,000 sitting there' waiting for expensive recruits.

The SabreCats clawed their way into contention, but the Tasman Mako have prevailed in the opening match of their US rugby tour.

Former All Black is coming back from Canada for latest addition to his family.

The Highlanders set-piece was dominated by the Waratahs in Sydney trial as Crusaders await in Wanaka next week.

Highlanders in the dark

Head coach Aaron Mauger reveals he first heard of the trial from a media report and still doesn't know how it will work.

Melting pots on the rugby pitch

OPINION: In sport, in nationhood and in the kitchen, mongrel's good.

OPINION: So long 2019, you sparked sporting joy for those inclined to look for it.

Hawke a hero, yet Barrett biffed?

Kiwi coach flies into Sydney with hectic schedule to kick-start his coaching reign.

"It hits you pretty hard," star says of battle to deal with his Rugby World Cup omission.

Retiring Kiwi referee reveals why All Blacks halfback is the most memorable player he recalls from his career.

Former All Black hasn't really considered a return to the test arena after rejoining the Chiefs for Super Rugby.

OPINION: At the end of 2018, it seemed New Zealand Rugby had turned a corner and started respecting women, but a year later it appears all that work has been undone

All Blacks and Hurricanes loose forward scoops three awards, including the big one, at NZ Rugby's night of nights.

All Black chosen by his peers among a host of other winners in the New Zealand Rugby Players Association awards.

Following the Springboks' iconic victory in Japan, rugby must help tackle the country's many social issues.

After being knocked out of the final, Kyle Sinckler came home to a cold house, a hateful dog and a broken dishwasher.

Former Blues coach demands crackdown on halfbacks slowing the game down at the ruck as box kick debate rages on.

Former world rugby player of year takes over from Rory Best as Andy Farrell names first squad since taking over from Joe Schmidt.

The Highlanders set-piece was dominated by the Waratahs in Sydney trial as Crusaders await in Wanaka next week.

Highlanders in the dark

Head coach Aaron Mauger reveals he first heard of the trial from a media report and still doesn't know how it will work.

Baby Tahs are the real deal

The next generation of Waratahs give even the most disillusioned NSW fan something to get excited about ahead of the Super Rugby season.

ABs playmaker back after nine-month absence with serious knee injury as Blues get the better of Chiefs in Waihi.

From the Central Vikings to Pure Black Racing, teams have come and gone in NZ.

Their losing streak has reached 50 games but their own All Black has come home and more blood brothers could follow.

Resignation never an option for coach

"There were times when I knew I got things wrong but I never thought I am not the right person for the job."

Newly appointed White Ribbon ambassador Craig Calder urges families to think and respect each other under the pressure of Christmas.

International court action considered and IOC could get involved as 7s system slashed.

He might have missed the final through injury but, with no clothes on, he was the star of the celebrations.

English champs to be relegated